Night markets in Taiwan are street markets in Taiwan that operate in urban or suburban areas. They are similar to those in areas inhabited by ethnic Han, such as Southeast Asia. A few, such as Huaxi Street Tourist Night Market, (or Snake Alley) utilize purpose-built marketplaces but most occupy either sidewalks (pavements) adjacent to streets or entire streets that are normal thoroughfares by day. Some night markets in smaller side streets or lanes feature retractable roofs. Most of the markets operate daily and feature a mixture of individual stalls hawking clothing, consumer goods, xiaochi (similar to snacks or fast food), and specialty drinks. The atmosphere is usually crowded and noisy with hawkers shouting and fast-paced music playing over loudspeakers. Taiwan Night Markets changed from small local gatherings to noisy streets lined up with vendors. These vendors have to adhere to some laws set by the Taiwanese Government. There are vendors selling food in some of the most famous Night Markets all around Taiwan. There are many night markets in Taiwan.

Night markets in Taiwan have become famous for their xiaochi, an important category of Chinese food which literally translates to "small eats". Served in portions similar to Spanish tapas, these dishes are often served as carry-out items, but many sellers provide small folding tables and stools for customers who would like to sit while they eat. These dishes are offered at low prices, usually around $30 to $50 NTD (≈$1–$1.75 USD). Visitors who expect to eat enough to be full during a trip to the night market will usually spend around $100NTD - $300NTD (≈$3–$10 USD). Most night markets also have some small restaurants, which provide a number of simple courses that allow people to finish a full meal without having to eat their way through the entire market.

Though some of the xiaochi foods available will change from year to year with passing fads, certain xiaochi foods such as oyster omelets, chicken shawarma, and stinky tofu persist and have become staples in many night markets. Sometimes, the night markets of a city, or even just one particular market within that city, become well known for a certain type of food that is unique to the area, or prepared particularly well there. For example, Tainan has become known for its ta-a noodles and "coffin cakes(棺材板)", bread baked into the shape of a stuffed, hollowed out coffin. In Taipei, the Shilin Night Market features a particular store, which is well known for serving tasty fried chicken breast in large portions and for a low price. There is also the iron eggs from Tamsui.

In recent years, many of the night markets have become popular tourist destinations among sightseeing foreign travelers. It is common to see many travelers with cameras, snapping photographs amidst the crowds (and of the crowds) within the streets. Some of the night markets, such as the Shilin (at Yuanshan, Taipei) and Shida night markets (next to National Taiwan Normal University) are among the first places that Taiwanese students will bring international students for a cultural experience.

In addition to food, night markets feature various forms of entertainment and a lot of shopping. Numerous products for sale include clothes, bags, shoes, trinkets, kitchen items, etc. Some night markets will have areas that are dedicated to certain products such as clothes, which are sold both by street vendors in the 100 to 300 NTD (≈$3–$10 USD) range and in the small storefronts lining the streets usually priced slightly higher in the 300 to 500 NTD range. These shops are often open during the day as well, especially during the afternoon before the evening rush. Carnival-style games are typically available to play for the price of a few coins. The night market in Tamsui is especially well known for featuring traditional carnival games such as balloon shooting, net fish, shooting marbles, and an assortment of mini games that could only have otherwise been seen many years ago. 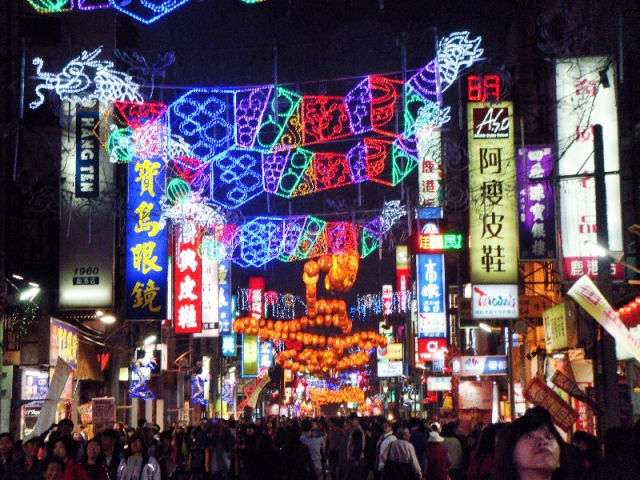